“For behold, I create new heavens and a new earth, and the former things shall not be remembered or come into mind.
But be glad and rejoice forever in that which I create; for behold, I create Jerusalem to be a joy, and her people to be a gladness.  I will rejoice in Jerusalem and be glad in My people; no more shall be heard in it the sound of weeping and the cry of distress.
No more shall there be in it an infant who lives but a few days, or an old man who does not fill out his days, for the young man shall die a hundred years old, and the sinner a hundred years old shall be accursed.
They shall build houses and inhabit them; they shall plant vineyards and eat their fruit.   They shall not build and another inhabit; they shall not plant and another eat; for like the days of a tree shall the days of My people be, and My chosen shall long enjoy the work of their hands.
They shall not labor in vain or bear children for calamity, for they shall be the offspring of the blessed of the Lord, and their descendants with them.
Before they call I will answer; while they are yet speaking I will hear.
The wolf and the lamb shall graze together; the lion shall eat straw like the ox, and dust shall be the serpent’s food.
They shall not hurt or destroy in all My holy mountain,” says the Lord.

If in Christ we have hope in this life only, we are of all people most to be pitied.

But in fact Christ has been raised from the dead, the firstfruits of those who have fallen asleep.  For as by a man came death, by a man has come also the resurrection of the dead.  For as in Adam all die, so also in Christ shall all be made alive.  But each in his own order: Christ the firstfruits, then at His coming those who belong to Christ.  Then comes the end, when He delivers the kingdom to God the Father after destroying every rule and every authority and power.  For He must reign until He has put all His enemies under His feet.  The last enemy to be destroyed is death.

But on the first day of the week, at early dawn, they went to the tomb, taking the spices they had prepared.  And they found the stone rolled away from the tomb, but when they went in they did not find the body of the Lord Jesus.  While they were perplexed about this, behold, two men stood by them in dazzling apparel.  And as they were frightened and bowed their faces to the ground, the men said to them, “Why do you seek the living among the dead?  He is not here, but has risen. Remember how He told you, while He was still in Galilee, that the Son of Man must be delivered into the hands of sinful men and be crucified and on the third day rise.”  And they remembered His words, and returning from the tomb they told all these things to the eleven and to all the rest.  Now it was Mary Magdalene and Joanna and Mary the mother of James and the other women with them who told these things to the apostles, but these words seemed to them an idle tale, and they did not believe them.  But Peter rose and ran to the tomb; stooping and looking in, he saw the linen cloths by themselves; and he went home marveling at what had happened.

A Stone’s Throw From The Rolled Stone

There’s an old Peanuts cartoon in which Charlie Brown tells Lucy they have to stop fighting and find a kinder way to resolve their conflicts. He tells her that the planet is filled with people hurting each other, that it’s possible that they, as children, can make a new world order.

Lucy listens for a minute and POW! She knocks him to the ground and walks away saying, “I had to hit him quick, he was beginning to make sense.”

Apart from God’s purpose in and through the Cross, I’ve often wondered if that wasn’t part of the reason the Sadducees and Pharisees reacted like that did to Jesus’ teaching. It was beginning to make sense. And if it made sense then it meant their faith was inconsequential, their lifestyle without purpose and their whole life had been without meaning.

Rather than repenting, renewing their faith and embracing God’s purpose for their lives, they protected their life and lifestyle by eradicating the one whom they thought was the threat. Whatever their motive, through their manipulations, Jesus was arrested, tried, condemned to death, and crucified. With His death, darkness descended on Israel and in the hearts of followers of Jesus.

Their hope, their dreams, their vision of the future died with Him. The disciples and all other followers found themselves hiding and cowering in fear for their own lives. Their spirits were crushed. Their faith was dead and buried. The only thing they could cling to was each other. But that was Friday.

The women discovered the empty tomb. The angels proclaimed the Good News of the Resurrection. The disciples were hard pressed to believe but then Peter saw the cloths lying there and he believed! He believed and that’s what draws us here today. We believe! The disciples had a hard time believing until Peter told them what he had seen and Jesus stood in their midst; we believe.

After all the attacks on Christianity and all the attempts to debunk and ridicule the truth of the Bible, we still believe. Why is that? Well, first, truth will always win out. The Good News of the Resurrection Jesus Christ from the dead cannot die because He IS Alive.

He is alive and that makes all the difference in the world. The Good News of the Resurrection gives us-

A woman whose husband had died and whose funeral was held about two months before. The day Everett died, Emma closed the blinds and pulled all the curtains and sealed herself in the darkness of her grief.

It was one of those dark, drizzly days and when the pastor entered her house, it was like stepping into a tomb. We sat down and went through all the first few minutes of informalities. And then Emma burst out with, “Is the resurrection real?”

With a deep sigh Emma said, “I want a sign.”

I told her the only sign I knew of was the empty tomb. Emma said, “That’s not enough. I want more than that.”

As they talked the rain had been coming down harder and harder as the storm blew through. It had gotten even darker. The day seemed to match their moods. The pastor was depressed he had come to help and didn’t do a very good job.

Before he left, they prayed and the pastor prayed for a sign for Emma; something to ease her grief and to help her know the truth of the resurrection. As he walked down the hall, he felt useless as a Pastor because he hadn’t been able to reach her.

The pastor stepped outside and started down the walk. At first he didn’t even notice that the sun was out and it had stopped raining. The western sky was beginning to lighten up. He immediately turned around and rang the doorbell.

The door opened and he took Emma’s hand, pulled her outside and pointed. They both stood there in stunned silence as they looked at one of the most beautiful double rainbows. It was a horizon-to-horizon full double rainbow. The colors were brilliant. Emma started crying. And then she started laughing. She looked at me and through her tears and laughter said, “He’s alive.”

She hugged me, ran inside, and started opening curtains and blinds.

The Good News is that God enters our lives and meets us where we are. God enters the ordinary and brings Hope for Today and –

That is what God promised.

In the very first church a pastor was visiting a member who was in the VA Hospital, dying. The pastor hadn’t been at the church very long, so he really only knew the family from the few visits to the hospital. But in those visits, Charles and the pastor had become friends. They were both former Coasties, veterans of the Coast Guard.

One night, about 3:00 am, the doctors had called the family and they called me. It was obvious that he wouldn’t be with us very much longer.

The pastor really didn’t know what to do or what to say. That was the first time he had ever been faced with anything like that. He did the only thing he knew how to do. They prayed. They joined hands around the bed. He was praying for God’s guidance and strength.

No sooner had I finished praying and every head was lifted than Charles opened his eyes. He was looking up. It looked like he was looking at something a long distance away. His eyes were clear and bright and a beautiful radiant smile filled his face. He took a deep breath and said, “Oh, it’s beautiful over there.” Then he died.

That family was given the rare opportunity to see the face of one who experienced the reality of heaven.

The Resurrection gives us Hope For The Future.

In the movie The Ultimate Gift, a little girl, Emily, and her mother. Emily has an incurable disease and is dying. Jason has come to the hospital to check on his pint-sized friend, Emily. When he arrives at her hospital room he finds it empty and an orderly is changing the sheets.

In a panic, Jason asks about Emily. The orderly tells him, “She’s with God.” This takes him by surprise, but soon he discovers that what the orderly meant was that she is praying in the hospital chapel.

Now that he has been to her hospital room he knows about her and her condition. She has cancer. She says, “No more mystery.”

Jason tries to comfort her by saying that he is sorry, but Emily snaps, “Shut up. Don’t be pathetic!” Emily looks over at a statue of Jesus with his arms raised, beckoning. She says, “I wonder if He takes advance orders.”

Confused, Jason asks, “For what?”

Emily says, “For my place, you know, there.”

Jason says, “What do you think it will be like?” and Emily confidently replies, “Butterflies. Lots of butterflies. Do you know God painted the colors of the butterflies with His fingers.”

“I didn’t know you thought about stuff like that.” Emily, a little sad now, says, “I think about dying. I think there’s something basically unfair about a person dying. I even hate the idea!” Then Emily sobs.

“You know, I don’t know much about God or Jesus, but (and he glances toward the statue of Christ), but I can promise that those arms are meant for you.”

Like Emily, most of us hate the very idea of death but the Good News of Easter is that the Resurrection is God’s final Word. The arms of Jesus, first from the cross and then from the empty tomb, reach out to each of us to bring us hope of new beginnings, hope in the face of the darkness of death.

The arms of Jesus reach out to us and fill us with hope.

Hope For Today and Hope for The Future. 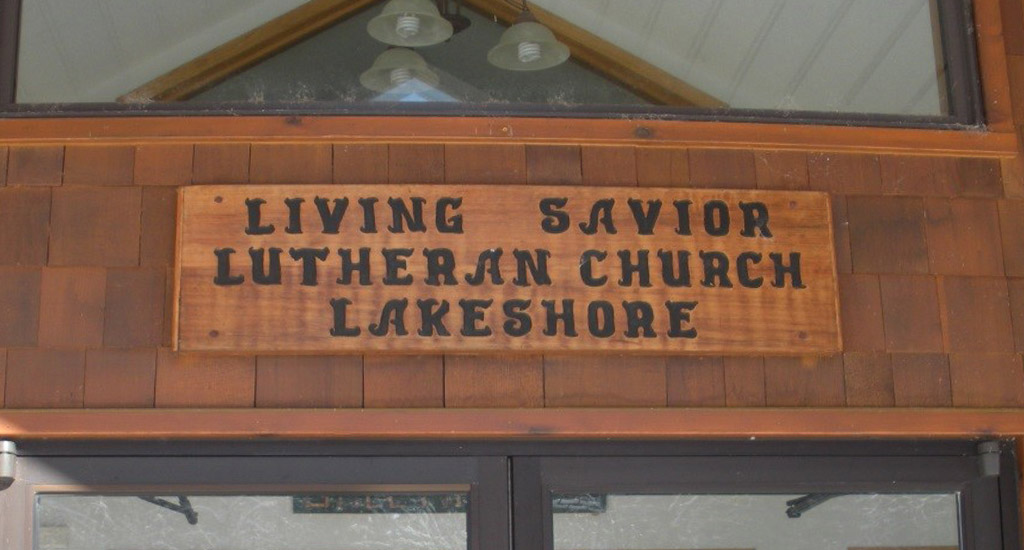